The Minefield: Advertising Hype in Binoculars

So, you are after a binocular for astronomy. You have been advised by well-meaning friends, vendors, and "experts" in astronomy magazines and on internet forums that you can't go far wrong if you opt for something that has "Fully Multi-Coated" (FMC) and "BAK4 prisms" printed on the binocular's cover-plate.

This is very much not the case. Let's see why:

Well, first of all, there are at least a dozen relevant things that "Fully Multi-Coated" (FMC) and "BAK4 prisms" (or "BaK4 prisms")tells you exactly nothing about. These include, in no particular order:

But at least it will tell you about the coatings and the prisms, won't it? Well, no, not really: 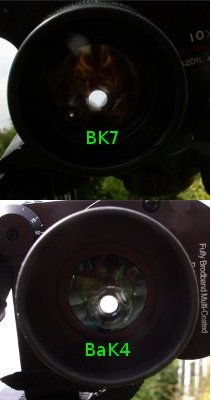 We all know that, say, "10×50" printed on the cover plate means that the binocular has a magnification of ×10 and an aperture of 50mm, don't we? Well, it might do. It also might not:

So, that's about it. What can we conclude? Only that what is printed on a binocular cover plate does not necessarily tell you anything about the binocular. I have yet to see a Fully Multi-coated budget 10×50 with BAK4 prisms that gives images of the quality or brightness of a genuine Zeiss (Jena) 10×50 (single-layer coatings and BK7 prisms); maybe now you know why.

What can you do? As someone on a forum recently wrote with respect to budget binoculars: "The only really telling way to rate any bins is by putting them up to your head and have a look through them." Always try before you buy!